Polimom was just like every other little Janey who teeters out of Mommy’s closet in high heels 7 sizes too big. In fact, there’s even a picture somewhere of Polimom at age 10 or thereabouts, posing in the backyard.
I was wearing a (relatively) short skirt, scarf, and my mother’s go-go boots, which had long-since gone out of style, but were still hanging around in my mother’s closet. I can’t remember the occasion for this picture (or even when I last saw it), but I do remember feeling beautiful — all grown up; a young woman. I looked like a cross between my Barbie dolls and my mother in her younger days.
Little girls have always tried to model the styles and mannerisms of older girls (read: young women). It’s part of growing up, and as far as I know, it always has been. So what’s different between the Little Polimom of yesteryear and how little girls view themselves today? From USA Today:

Advertising and media images that encourage girls to focus on looks and sexuality are harmful to their emotional and physical health, a new report by the American Psychological Association says.

The report, released Monday, analyzed some 300 studies over the past 18 months. It included a variety of media, from television and movies to song lyrics, and looked at advertising showing body-baring doll clothes for pre-schoolers, tweens posing in suggestive ways in magazines and the sexual antics of young celebrity role models.

The researchers found such images may make girls think of and treat their own bodies as sexual objects.

As an all-grown-up Polimom with an Adorable Child (AC) of my own, I can absolutely relate to those who are concerned. The report, however, specifically calls out Bratz dolls, and I think they’re firing at the wrong target. 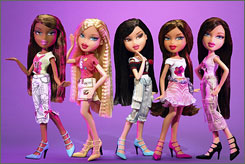 The panel defined sexualization as occurring “when a person’s value comes only from her/his sexual appeal or behavior, to the exclusion of other characteristics, and when a person is sexually objectified, e.g., made into a thing for another’s sexual use.”

The report cites Bratz dolls, in particular, for “sexualized clothing such as miniskirts, fishnet stockings and feather boas.”

“Although these dolls may present no more sexualization of girls or women than is seen in MTV videos, it is worrisome when dolls designed specifically for 4- to 8-year-olds are associated with an objectified adult sexuality,” the report says.

So what does it mean if Polimom played with Barbies, and dressed them in fishnet stockings and mini-skirts? Because I absolutely did.
Objectified adult sexuality is a multi-dimensional term. It implies a young person who has internalized the image as related to sexuality, but it also imbues the images with an enhanced adult perspective. Little girls see dolls that look like the “big girls”; that’s how they dress. Adults see sexuality in all this because that’s how they interpret all those clothes and images when seen on adults.
Society has always objectified women, and furthermore, it’s always started early in childhood. Is today really all that different?
As a parent, I certainly worry about all of this, and I spend a fair amount of time talking with AC about the “role models” (*gag*) she sees on television. She knows, for instance, that Britney is an absolute disaster as a human being — and I don’t remember my mother having conversations like this with me.
But I’m sure she would have — perhaps during a “girl chat’ in front of her bathroom mirror, as she taught me how to put on lipstick…

Added: Ed Morrissey is also very worried about these dolls, and writes:

Preteens and little girs do not have any sophistication in defending their own identity and values, and dolls like the Bratz Girls model the kinds of behavior that lead to teen pregnancy, the spread of STDs, and the general devaluation of women and their role in society.

The Taleban is al Qaeda

PolimomAfghanistan, Terrorism, WarFebruary 19, 2007
A NY Times article this morning has everyone doing their best Gomer Pyle imitations: American officials said there was mounting evidence that Osama bin Laden and his deputy, Ayman al-Zawahri, had been steadily building an operations hub in the mountainous …
END_OF_DOCUMENT_TOKEN_TO_BE_REPLACED
2

The Color of Money

PolimomMediaApril 16, 2006
Although this is totally apropos of Easter, or anything else today, I just had to share: A Big Ad
END_OF_DOCUMENT_TOKEN_TO_BE_REPLACED

The battle is joined

PolimomHurricanes, Local PoliticsJanuary 6, 2006
This is what happens when communications break down, and officials talk out of both sides of their mouths to appease constituents: I will rebuild and nobody’s going to tell me any different,” Marchand said Thursday at a news conference called …
END_OF_DOCUMENT_TOKEN_TO_BE_REPLACED
1