Back in January I introduced Rouge — one of two odd little critters Santa decided we needed this year. 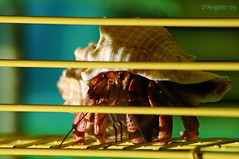 You might not recognize him anymore from that picture, because he changed shells a couple of months ago. His new one’s a lot less interesting (imho), but they go where they will, and he’s still cute.
I’ve only gotten one or two good shots of Moulin though. 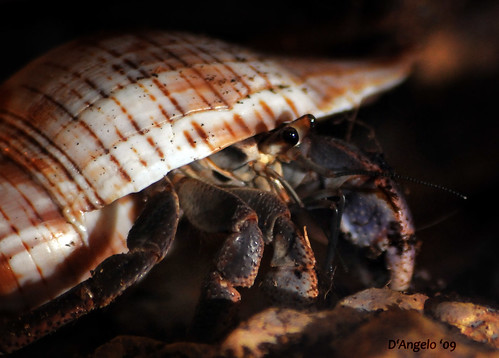 Not only is she much shyer, she came from the store missing one of her walking legs and wearing a ridiculously elongated shell that she had trouble maneuvering. (Come to think of it, the “shyness” probably stemmed from the physical limitations.)
About 5 weeks ago, though, Moulin and Rouge both burrowed to the bottom of their tank and disappeared for awhile. Rouge came back up from his molt about 10 days ago, but we didn’t see Moulin again until this morning.
The second thing she did was climb to the very top of a plant growing in the tank. 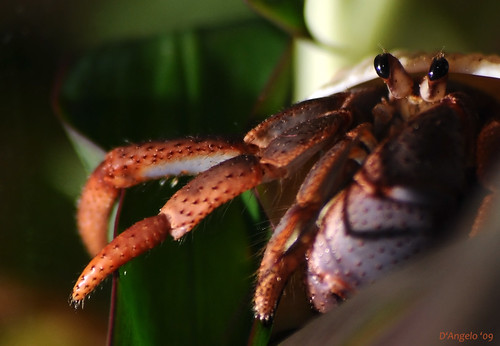 Clearly, having all one’s legs makes for a more nimble crab.  Molting’s a good thing.
Oh… and the first thing she did? She changed shells. She’s now wearing Rouge’s old one.
This is going to get confusing, I think. LOL!

PolimomBlogging, Media, Politics (Historical)April 9, 2009
Once upon a time, there was some idea that the blogosphere was the “new media”. Remember that? The citizens were going to keep government honest; it was going to be a haven from the blatant bias in our traditional media. …
END_OF_DOCUMENT_TOKEN_TO_BE_REPLACED
3

PolimomJust stuffMarch 5, 2006
Polimom returned late last night from her first trip to College Station consumed with a burning question: How do normal people manage to eat? (By “normal”, Polimom means people over 30, accompanied by children, who are not interested in sushi …
END_OF_DOCUMENT_TOKEN_TO_BE_REPLACED

PolimomJust stuff, PhotographyMay 4, 2009
I’ve now had a chance to see Caddo Pond in two seasons:  winter (late), and spring.  Spring is glorious: And for the record:  Realtors will stop and wait while you lay down in a field of wildflowers.  Or at least, …
END_OF_DOCUMENT_TOKEN_TO_BE_REPLACED
3

PolimomJust stuff, SocietyMarch 18, 2006
It’s 3:38 a.m. Texas time, and Polimom has been awake for two hours – because it’s 9:38 in London, and evidently my sleep-brain missed the plane out of Gatwick. I’m hoping it’ll catch up to me sometime this weekend, perhaps …
END_OF_DOCUMENT_TOKEN_TO_BE_REPLACED
2