I guess the implication of this story is that protective orders can be used as shields or something.

Marine Lance Cpl. Maria Lauterbach had a protective order against the fellow Marine accused of killing her, but the order expired in September, military records show.
Cpl. Cesar Armando Laurean signed the agreement on June 26. It expired September 24. Lauterbach had accused Laurean of raping her.
In the military protective order, Laurean is forbidden from contacting Lauterbach in any manner, including through a third party, and ordered to stay at least 1,000 feet from her.

Unh hunh. No doubt that piece of paper would have helped her a lot. 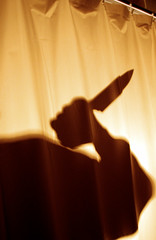 PolimomEducation, parentingJanuary 15, 2008
When Adorable Child (AC) started middle school in the Katy school system this past year, I had a somewhat malicious sense of satisfaction in knowing she has to get up a full hour earlier (6 am) than she had to …
END_OF_DOCUMENT_TOKEN_TO_BE_REPLACED

PolimomCrime and Justice, MediaFebruary 23, 2006
There’s been great fuss and bother in the Houston blogosphere / media about HPD’s proposed installation of surveillance cameras to help “fight crime” in the city. Is it the beginning of the Orwellian End to freedom and privacy, or is …
END_OF_DOCUMENT_TOKEN_TO_BE_REPLACED

PolimomCrime and Justice, ImmigrationSeptember 27, 2006
Last week, Houston Police Officer Rodney Johnson died — shot by a man who had been patted down, then cuffed and placed in the backseat of the cruiser. Polimom didn’t know this officer, but by all accounts he was professional, …
END_OF_DOCUMENT_TOKEN_TO_BE_REPLACED
5

PolimomCrime and Justice, Race RelationsDecember 6, 2006
At City Journal, Heather McDonald writes: New York’s anti-cop forces have roared back to life, thanks to a fatal police shooting of an unarmed man a week ago. The press is once again fawning over Al Sharpton, Herbert Daughtry, Charles …
END_OF_DOCUMENT_TOKEN_TO_BE_REPLACED