Okay. I’m back from vacation. But I’ve not returned to where I was, mentally — and watching Barack Obama’s speech last night brought that all the way home for me.
Politically speaking, it was an extremely good speech. There were a number of mandatory bridges to cross, and he did that forcefully, right out of the gate, with his praise for Hillary Clinton — in the second sentence, no less. And we’ve all heard the rumors about Bill’s nose being out of joint because he felt as if his presidential legacy was slighted (or at least not praised) during the Democratic Primary, so one assumes he’s feeling a bit better today, since Obama hit that theme also.
The very partisan approaches to the country’s many ills were pretty standard Democratic Party — absolutely appropriate to the DNC. Anything else would have been beyond bizarre.
And those “Greek or Roman columns” everybody was all in a tizzy about? LOL!!! Talk about much ado over nothing! That stage set looked more like the White House than anything else, and it was tastefully done to boot.
On net, I thought Obama hit it out of the park.
Furthermore, the construction of the speech was a work of art. He’s been criticized for being too vague; it’s been said that his soaring rhetoric is a liability at this point — that people don’t know what he stands for; that he’s given to platitudes.
Piffle.
Last night’s speech was a hybrid of specifics and challenges to the opposition, delivered with astounding oratorical skill — but that skill is hardly a problem he needs to overcome.
I’m no more enamored of the populism and redistribution of wealth themes this morning, though, than I’ve ever been… which brings me to where I am, mentally.
However brilliant Obama’s speech was last night (and it was), it could not escape the partisan nature of its true audience — and that audience is not me.
I like Barack Obama much more than the political party he’s representing — yet because I’ve publicly supported him, Polimom’s inbox is now stuffed every day with updates from various Democratic election updates from local candidates, and appeals for me to regurgitate somebody’s partisan talking points.
Because this country’s politics are so very black and white, I cannot seem to write without being pigeon-holed and then taken for granted — and I absolutely refuse to go there.
So I’m backing out of politics, yet again. And while I may write now and then about the candidates or issues (I have several things lined up in my mind for McCain and Dayton Ohio), I’m going to go back to my photography.
Here — have a pretty picture: 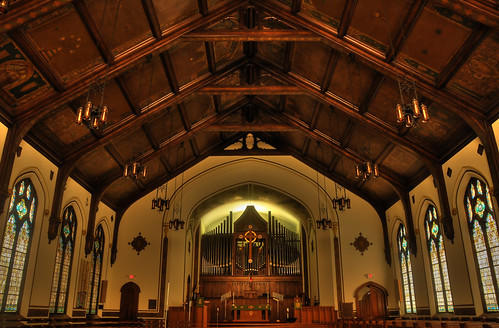 This image is my first successful attempt at HDR — and it’s also taken, conveniently, in Dayton, Ohio, where I spent a great deal of time hearing about their many problems a couple of weeks ago.
Beginning next week, I plan to start something new here. If you’re into photography, please come and join me. If you’re looking for red meat politics, though, or blind partisan bashing, you may as well take me off your reading list — and you should definitely get me off your email distribution.
:>

Notes from the road…

PolimomPhotographyAugust 10, 2008
Since I’m hooked into a free WiFi hotspot, I decided to share some of where I’ve been. I spent the early part of last week in Dayton, OH — one of America’s fastest dying cities. And yes, they have Wright …
END_OF_DOCUMENT_TOKEN_TO_BE_REPLACED
5

Thanks so much, everybody… /snark

PolimomEconomySeptember 21, 2008
I’d just like to add to the general cacophony online for a moment:  I’M PISSED OFF!!! Here I sit, in my mortgaged-with-20%-down house and ZERO credit card debt, watching my government prepare to rescue reward  bail-out companies who made reckless, …
END_OF_DOCUMENT_TOKEN_TO_BE_REPLACED
6

PolimomElectionsJanuary 30, 2008
There’s some consternation in the conservative blogosphere this morning about the Florida results. They’re trying to understand how a closed GOP primary could include Independent and Democratic voters. Considering we’re talking about the Sunshine State here (they have such a …
END_OF_DOCUMENT_TOKEN_TO_BE_REPLACED

But we don't trust Bush!

PolimomIranApril 13, 2006
Yet another interesting poll out from Times/Bloomberg (they had another on immigration that I used over at Polimom, Too): Americans are divided over the prospect of U.S. military action against Iran if the government in Tehran continues to pursue nuclear …
END_OF_DOCUMENT_TOKEN_TO_BE_REPLACED