Pounce seems to be resting quietly again.
Thank goodness.
I can’t bear the thought of him suffering. 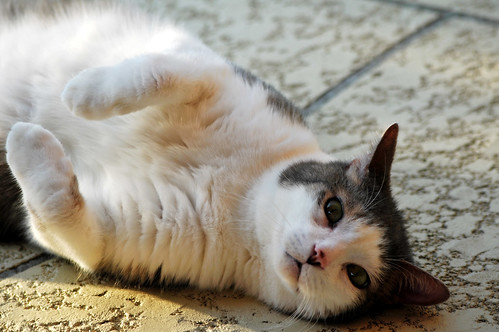 It’s been a brutally fast decline.  Even though the vet told us that this type of cancer moves very quickly, I’m still shocked.
He’s only 11 years old.  I expected — looked forward to — many more years with him.
But in the last week, he’s started resting between bites of food, and more than once I’ve seen him lying down while drinking from his water bowl.  Rather than walking, he’s kind of staggered from place to place, as his strength has failed.
Right up until this morning, though, he seemed at least comfortable.  Yes, he’s been eating less and less (and losing weight dramatically), but he still loved to be petted and talked to, and his purr was strong and immediate.
Everything’s different this morning.
The vet opens at 7 am.
I don’t know if I can do this.
How will I get through it?
I know how.  I’ll call up the fabulous memories;  he’s given us so many over the years.
While they’re readying his merciful final sleep, I’ll pet him and visualize him in the arms of my toddler daughter.
He was just about the same size as she was, and when she put him into the toddler swing out back, he fit perfectly.  He’d just sit there in that swing, his face radiating tolerance (just barely) as she pushed him back and forth.
While I’m holding him, I’ll remind him about the bird he savaged right outside my office window one morning — while I was on a conference call.  He probably remembers that, since his feast was uninterrupted.  The best I could do was close the blinds so I couldn’t see.
Or I’ll apologize for the many feathered feasts I denied him — like the time the birds’ nest fell into the house from the chimney, releasing 5 or 6 potential meals into my bedroom.  (That was a crazy morning!!)
I’ll rub between his eyes and beside his face, just where he likes it, and I’ll remind myself that in these eleven years, he’s had a lot of near-misses.  Several times, the vets have barely saved him.
After each of these terrifying brushes with death — after he’d recovered and was back to being fat and sassy — I’d gratefully hold him and laugh about how he was now on his second life.  Or his third.  Or his fifth.
Not this time.  This was number nine.
As he slips away from his pain — and from us — I’ll tell him how much I love him.  I’ll thank him for being such a wonderful part of our family.  For tolerating the danged dog.  For always remembering to keep his claws in.  For keeping Adorable Child company in the night.
Nine lives aren’t nearly enough this morning. 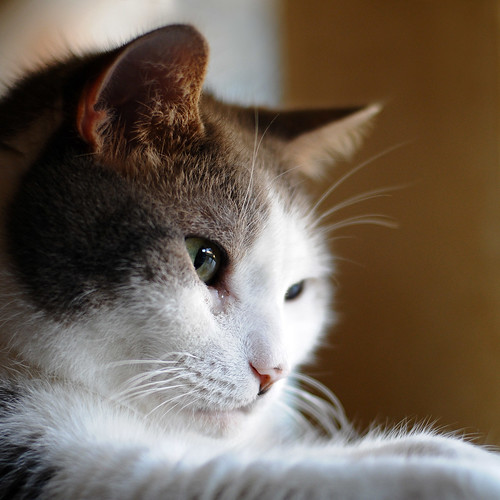 It turns out that he was resting more than comfortably.   He was resting permanently, and most likely slipped away even as I wrote this.  I’m so glad I was there with him at the end, even though I didn’t realize that’s what it was.  I know it gave him some comfort.

We’ll miss him.  I already miss him.

Saints. Sunday. Be there.

PolimomLocal Politics, SportsJanuary 18, 2010
Okay.  So it’s no secret that I’m a rabid New Orleans Saints fan.  Have been for decades;  even went through the “Ain’ts” stage, complete with bag on head. This year, though, is altogether different.  They’re playing Sunday against Minnesota for …
END_OF_DOCUMENT_TOKEN_TO_BE_REPLACED
3

PolimomSportsSeptember 27, 2008
I’m getting this out even later than I did last week, thanks to the increasing madness in the presidential election.  (I’m a raving political junkie these days, I guess.) First, a summary of last week.  Because I differed so widely …
END_OF_DOCUMENT_TOKEN_TO_BE_REPLACED
3

PolimomFamilySeptember 11, 2010
Helen Marie McCabe — aka Goldenrod — aka my mother — passed away very early this morning. I’ll be making arrangements for a memorial service soon.  If you haven’t heard from me directly and wish to be notified and/or attend, …
END_OF_DOCUMENT_TOKEN_TO_BE_REPLACED
9

PolimomJust stuff, Stupid stuffMarch 25, 2008
By golly, that (new) New York governor sure is out in front of any potential “gotcha” political daggers, isn’t he? NEW YORK (AP) — New York’s new governor, who disclosed last week that he and his wife committed adultery several …
END_OF_DOCUMENT_TOKEN_TO_BE_REPLACED
1