Adorable Child stayed at a friend’s house last night, so she doesn’t yet know what’s waiting for her here at home. 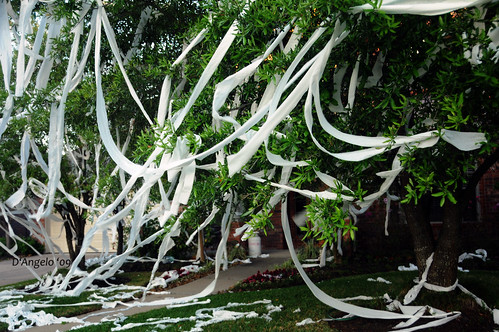 Polimom and Dear Husband, otoh, have known about this since 4:30 am, when the doorbell rang.  And when we didn’t rush downstairs, it rang yet again, accompanied by pounding.
Evidently it frustrated them immensely that we didn’t race downstairs and outside.
But you see, we already knew what was out there.  Didn’t even have to peek out the window (though of course we did!).
Why?
Because this was payback.  Adorable Child and a flock (gaggle?) of her girlfriends had gone to someone else’s house earlier.  And been caught.
I told her that she really didn’t want to be caught. 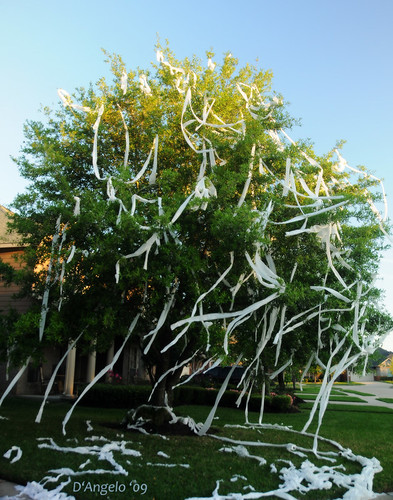 You may be wondering how it came to pass that I was even having such a conversation with her.
Good question.
Let’s just say that I can think of worse things they could be up to.

PolimomPhotographyMarch 25, 2009
I’ve spent several fun days processing photos from last week’s vacation.  For the most part, they look like every vacation shot you’ve ever seen from a trip to the mountains. Except for one set. Early one morning, while everyone else …
END_OF_DOCUMENT_TOKEN_TO_BE_REPLACED
4

Some promises for my daughter

Teens, time, and trying to earn a buck

PolimomEducation, parenting, SocietyDecember 21, 2006
I remember lots of things about being a teenager: braces, acne, boys (!), rebellious arguments with parents, and having entirely too much time on my hands. (Did I mention boys?) Of them all, though, it was “time” that impacted me …
END_OF_DOCUMENT_TOKEN_TO_BE_REPLACED
4

PolimomparentingMarch 5, 2007
Adorable Child (AC) went to her first concert last night. 8th row seats on the 50 yard line… 3 school friends… 70,000 screaming kids her age… and all of it priceless. Jessica Kourkounis: For the Chronicle Unfortunately, since AC went …
END_OF_DOCUMENT_TOKEN_TO_BE_REPLACED
3