Obama? McCain? I'm back on the fence.

Update:  I’ve expanded on my rationale in a separate post at The Moderate Voice.
There’s been a lot of speculation (and angst) about the size and scope of McCain’s convention bounce.  If the blogosphere is any indication of the true state of things (and that’s a big “if”), Democrats are on the verge of panic and the Republicans are riding a swelling momentum tide.
What’s going on?  Is it just Sarah Palin?  Certainly that’s part of it, but there’s more to it than that — and if this Gallup poll is accurate, it looks to me as if Democrats have good reason to panic.  It seems that independents are starting to break toward John McCain.

I suspect that Gallup poll is absolutely correct.  In fact, if they’d called me for their poll (nobody ever does), I’d have been one of the shifting numbers — because I can no longer say with any degree of confidence that I’m going to vote for Barack Obama.
David Brooks hits some of the reasons why in the NY Times:

Last winter, Barack Obama succeeded by running a weird campaign. He wasn’t just a normal politician aiming for office, he was going to cleanse the country of the baby-boom culture war mentality. In his soaring speeches, he denounced the mores of both the Clinton and Bush eras and made an argument for unity and hope over endless partisan warfare.
But over the course of the spring, Obama’s campaign got less weird. The crucial pivot came when he failed to seize on McCain’s offer to do a series of joint town-hall meetings across the country. Those meetings would have elevated the race and shown that Obama is willing to take risks in order to truly change the way things are done.

That’s true.  Those meetings would have been a radical departure from the partisan garbage.  But in and of itself, turning them down wasn’t a problem.  Obama would have been fine if he’d come out of the convention hitting the themes of this spring’s campaign.
But he hasn’t.  He’s sounding more and more like an ordinary Democrat — and ordinary is NOT what this election should be about.
Meanwhile, John McCain has tossed ordinary right out the window.

The old warrior jumped right in. Think about how weird last week was. The Republican convention was one long protest against the way the Republicans themselves have run Washington. McCain’s convention speech barely mentioned his own party. His vice-presidential nominee came out of the blue and seems totally unlike the regular crowd of former eighth-grade class presidents who normally dominate public life. McCain’s campaign ideology, exemplified in a new ad released on Monday, is not familiar conservatism. It’s maverickism — against the entrenched powers and party orthodoxies.

Obama supporters are hung up on Sarah Palin, and whether she is or is not everything the Republicans have presented.  Myself, I don’t think she is.  How could she be?  She’s the GOP’s very own Messiah.  But that’s totally beside the point in this context.
Independents — like Polimom — have had it with the same old sh..t (SOS). And just at the moment, only John McCain seems to have remembered that elections can’t be won without us.
Granted, some of the SOS is wrapped up with McCain, too.  I detest the hyper-nationalism, for instance — this holier-than-thou approach to foreign policy and the patriotism litmus tests.  Furthermore, I’m extremely concerned about the threat to a woman’s reproductive choice under a McCain-Palin administration.
But that’s why Congress is there, is it not?  (Don’t laugh…)
Frankly, if Obama wants to swing this thing, he’s going to have to re-find his feet.  That streak of independent thinking, which was so alluring during the endless Democratic primary, must reassert itself.
Polimom has already removed the Obama sticker from the back window of the truck… and at the moment, it’s been mentally replaced with a great big question mark. 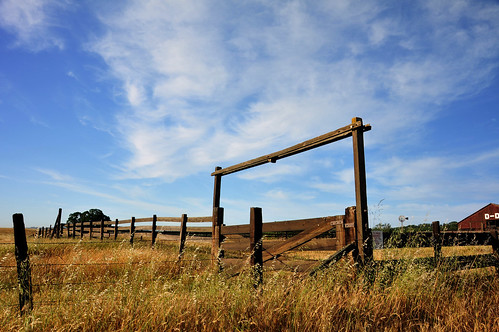 I’m back on the fence.

Another hurricane? Ack! What about Katy???

PolimomHurricanes, Local PoliticsSeptember 7, 2008
Every time a storm kicks up that might head into the Gulf of Mexico, folks in my neck of the woods start to hyperventilate. And twitch. And pack the cars. “When should I evacuate from Katy?” or “What can we …
END_OF_DOCUMENT_TOKEN_TO_BE_REPLACED
14

PolimomPolitics (Historical), Religion, TerrorismSeptember 19, 2006
Just a few weeks ago, two reporters were forced to convert, at gunpoint, to Islam… and they were viciously castigated by a number of noble conservative bloggers. (An excellent round-up is here.) Evidently, martyring oneself rather than converting to Islam …
END_OF_DOCUMENT_TOKEN_TO_BE_REPLACED
7

PolimomMiddle EastFebruary 14, 2006
This is kinda fun! TEHRAN, Iran – Not content with pelting European embassies with Molotov cocktails to protest against cartoons of the Prophet Muhammad, Iranians have decided to rename the “Danish pastries” relished by this nation of cake lovers. From …
END_OF_DOCUMENT_TOKEN_TO_BE_REPLACED

PolimomHurricanes, Local PoliticsAugust 30, 2008
This is just a shout-out to those folks from New Orleans who still read Polimom, all these (not so many) years later. As I write, the projections suggest that the surge this time could potentially be the worst case scenario …
END_OF_DOCUMENT_TOKEN_TO_BE_REPLACED
2