Russell and Millie (From the Road, Day 2)

Did you know that if you tell the Magellan to “avoid highways”, it can take you all day to cover just 4 counties?    Fun feature!
Of course, I kinda’ dragged things out by meandering down oddball roads in search of covered bridges.  Like this one: 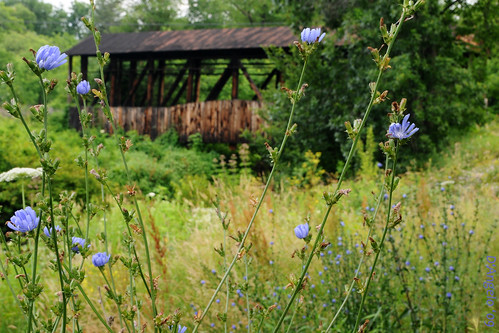 That particular bridge — Cuppett’s — was so very beautiful, surrounded by wildflowers and off the main road.  As much fun as it is to drive across them when they’re still in use, they’re not quite as photogenic as when they’ve been bypassed.
Unfortunately, they’re not all beautiful even then.  Bowser’s Bridge, for instance — where I’ll have to play around with the shots I took to save any.  But that’s not what I’ll remember about Bowser’s… cuz that’s where I encountered Russell and Millie.
I’d gone across a (very!) rickety footbridge and down a trail along the creek in search of a better photo angle when I heard their car pull up.  Knowing that I’d left mine unlocked (and keys in it!), I poked my head out of the trees long enough to see a very elderly man slowly emerging from a sedan.  He was 80 if he was a day, and so, reassured that he probably wasn’t going to jump into my rental and take off with it, I went about my business.
When I came back to the car, there he was still, admiring Bowser’s Bridge with his (I assumed) wife — a much more spry, youthful woman of about 70.
They were wandering their way home across Pennsylvania looking at covered bridges, they told me.  I said there was better viewing across this old footbridge, but the footing was iffy.  The woman immediately took off down the embankment, and the man was right behind her (much more slowly), ready to follow.
She warned him off, though, when she encountered poison ivy right in the middle of it, so he turned back and started chatting with me.  Turns out they’re engaged.  Russell’s wife passed away about 9 years ago, and Millie’s husband died 7 years ago.  They have so much fun running around together, they’ve decided to get married.
I loved them.  They took pictures of me before they left, so Millie could add the entire experience to her scrapbook, and off they went — my back roads directions to the next bridge in hand, fully prepared to get lost and ask a farmer how to get back on track.
They made my day, and reminded me of people now lost that I loved dearly.  I wish them well.
Not sure where I’ll be next, but I’ll drop some photos out here if I get the chance.  Later…

From the Road (Day One)

PolimomJust stuff, PhotographyJuly 20, 2009
Good morning from Bedford, Pennsylvania.  Since I’m still working on my first cup of coffee at a motel this morning, I decided to upload a couple shots from yesterday. I highly recommend vacationing this way.  It’s a blast, driving wherever …
END_OF_DOCUMENT_TOKEN_TO_BE_REPLACED
6

PolimomJust stuffJune 4, 2009
I’m outside on the patio right now, researching for a post about Obama’s speech in Cairo today.  (Added:  post’s finally up!)    It’s a breezy, not-yet-hot day — and I’m anticipating the arrival of any number of hyper-excited young teenagers …
END_OF_DOCUMENT_TOKEN_TO_BE_REPLACED
5

One in five has met a predator online?

PolimomBlogging, Crime and JusticeDecember 14, 2006
From KHOU: H-I-S-D Superintendent Abe Saavedra issued an urgent bulletin to parents Thursday warning of the dangers posed by internet predators. The Houston school district—working with the secret service — reports that one in five children who chat online have …
END_OF_DOCUMENT_TOKEN_TO_BE_REPLACED
9

PolimomJust stuffJuly 22, 2006
Hmmm… let’s see…. Katy, TX: 96 degrees and matching humidity? Or the mountains: 83 degrees and 20% humidity? Tough call, I know, and surely nobody from the Gulf Coast could possibly understand why I take a long vacation this time …
END_OF_DOCUMENT_TOKEN_TO_BE_REPLACED
2