For our anniversary this year, Dear Husband bought four tickets to yesterday’s game between the New Orleans Saints and the Houston Texans… and what seats they were! 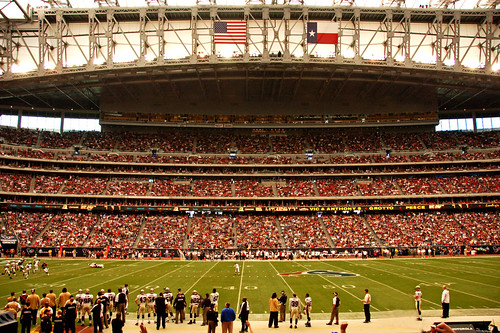 For a die-hard Saints fan like Polimom, this was awesome! But although he could provide the tickets, and he could get us safely to (and into) Reliant Stadium — an adventure in its own right — he couldn’t help the Saints play.
Too bad, cuz they could have used his assistance; the whole game pretty much looked like this: 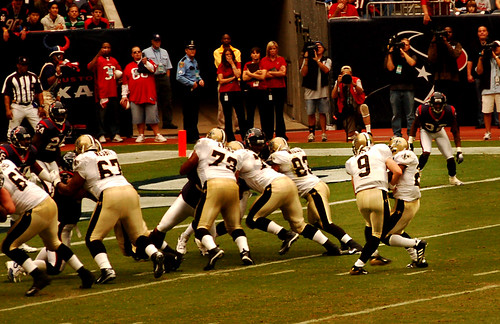 Hard to play well when the quarterback is colliding with his team-mates, yes? (And this disastrous play was followed immediately by a fumble on the 1 yard line… )
On the good news side, the punter got lots of practice. 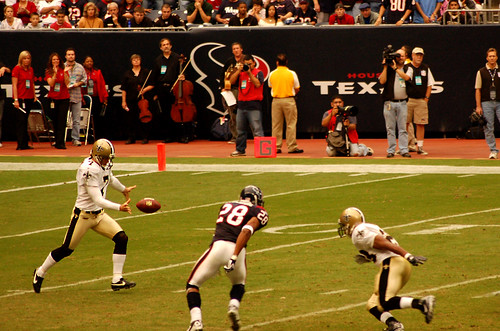 You know — in some ways, the Saints’ playing like garbage is comforting — kind of like a well-worn pair of jeans. On the other hand, it sure would be nice if last year’s Saints would come out to play a bit more often this year…
::sighing::

PolimomJust stuffNovember 15, 2007
Driving home from some danged place or another a few days ago, I passed a large undeveloped field. Said field still had a patch of woods, but it probably wasn’t more than 10 acres or so — and about 30 …
END_OF_DOCUMENT_TOKEN_TO_BE_REPLACED
1

PolimomHurricanes, Local Politics, Politics (Historical)March 2, 2006
For six months, fingers have remained rigidly extended, moving from target to target, seeking someone — anyone — everyone to blame for the hideous disaster of Katrina. It’s the State, the Federal, the Levee Board, the racists, the dishwashers, the …
END_OF_DOCUMENT_TOKEN_TO_BE_REPLACED
1

PolimomLocal PoliticsJanuary 9, 2006
Did you ever take one of those âSkills Aptitudeâ? tests? You know â the ones counselors give in high school to help kids figure out what types of careers they might enjoy based on their affinities or interests. New Orleans …
END_OF_DOCUMENT_TOKEN_TO_BE_REPLACED
3

PolimomEconomy, Elections, Local Politics, Politics (Historical)October 13, 2008
(On October 6 2008, I sent letters to each candidate running for US Congress in Harris and Fort Bend counties, asking them to publicly commit to fiscal responsibility via PAYGO.  I’m posting the replies (and lack thereof) by race / …
END_OF_DOCUMENT_TOKEN_TO_BE_REPLACED
5