Last week, at 11-5 against the spread, the Golden Coin outperformed Polimom yet again. In fact, Polimom’s only beat the Coin once in the last 3 weeks (since I started using it), and that was Week 12. (The Coin went 8-8 while Polimom was 11-5).
Let’s see if the coin can pull it off again. 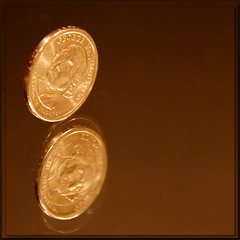 Washington over Chicago (+2.5) — This is the Feel Good game of the week for Polimom. I haven’t liked Chicago since their fans were so nasty to NOLA last year, and Washington deserves one in the win column in memory of Sean Taylor. C’mon, Redskins!
Philadelphia over NY Giants (+2.5) — McNabb’s supposedly coming back in this week, which (possibly) means the Eagles won’t throw the ball to the opposition quite so many times. But that does not explain how Philly ended up as the favorite in this game. I think the Coin blew this one — so much so that I’ve key picked this game in favor of the Giants.
Detroit over Dallas (-10.5) — I can’t get behind the Coin on this one, either. Polimom thinks Dallas is fixin’ to walk all over Detroit.
Oakland over Green Bay (-10.5) — 10.5 points is a lot, particularly since GB doesn’t tend to win by massive margins. But Oakland’s playing so far above their heads in this game, it’s almost funny. The Coin and I don’t see this one the same way, but given the spread, it could go either way.
San Diego over Tennessee (+0.5) — The only win Tennessee has had in the last 4 weeks came against Houston, and the spread’s only half a point? C’mon now….
Buffalo over Miami (+7.5) — You know you’re getting old when you can remember that Miami once had an actual football team… which is probably what’s behind my disagreement with the Coin here. I’m rarely right when I pick Miami these days, point spreads notwithstanding.
Cincinnati over St. Louis (+6.5) — Bad and badder? Worse and worser? Does anybody really care about this game???
Carolina over Jacksonville (-10.5) — Jacksonville’s gonna win this one. Since the only real question is by how much, Polimom agrees with the Coin: Jacksonville’s probably not going to cover this spread.
Tampa Bay over Houston (+0.5) — Only half a point? Hunh? The Coin (and Polimom) must be missing something… because Houston’s done. Put a fork in them.
Arizona over Seattle (-7.5)
Minnesota over San Francisco (+8.5) — Like Miami, San Francisco once had a football team. (No really! I’m not making that up!)
New England over Pittsburgh (+12.5) — FWIW, Polimom picked Pittsburgh in this game… but not for the win. I just couldn’t get behind the point spread. No walk in the park here for the Pats, folks. The Steelers aren’t going to just roll over. Not by a long shot.
Denver over Kansas City (+6.5)
Cleveland over NY Jets (+3.5) — Cleveland’s been surprising people much of the season, and judging by the spread, this week will be more of the same.
Baltimore over Indianapolis (-9.5) — The only justification for this pick is the point spread, which is just too wide for Indy’s sportsmanship…
New Orleans over Atlanta (+4.5) — Last week, the coin ticked me off by picking against NOLA. Of course, the coin was right and Polimom was wrong — but not a chance this week. The Coin and I agree; Atlanta’s in for a whuppin’.

So — there are six games where Polimom and the Coin don’t see eye to eye, and I’ve indicated those with italics. Yes, I realize I’m risking my ego this time, but sometimes, a coin toss is just a coin toss…

PolimomparentingDecember 4, 2007
As the parent of an increasingly angst-ridden adolescent, I think this was the hardest thing I’ve read in a long time: When Megan’s mother returned home, she found her daughter crying at the computer. After reading the messages, she criticized …
END_OF_DOCUMENT_TOKEN_TO_BE_REPLACED
3

PolimomSportsNovember 22, 2007
During last year’s football season, Polimom posted picks every week against the spread. Since I ended up second overall in the pool, I was okay with sharing my “expertise” (LOL!!) with the virtual world. This year, not so much. Polimom …
END_OF_DOCUMENT_TOKEN_TO_BE_REPLACED
1

PolimomSportsSeptember 20, 2008
The Golden Coin (TGC) is currently at 19-12 for the season.  Unfortunately, you’ll have to take my word for that, since Hurricane Ike derailed last week’s post. :< Also -- although I'm posting The Coin's picks this year, my ego …
END_OF_DOCUMENT_TOKEN_TO_BE_REPLACED

PolimomLocal Politics, SportsNovember 19, 2007
For our anniversary this year, Dear Husband bought four tickets to yesterday’s game between the New Orleans Saints and the Houston Texans… and what seats they were! For a die-hard Saints fan like Polimom, this was awesome! But although he …
END_OF_DOCUMENT_TOKEN_TO_BE_REPLACED
5