Yesterday, Barack Obama deployed a couple of well-used colloquialisms to hit the McCain campaign on its attempt to co-opt the “change” theme.

“That’s not change. That’s just calling something that’s the same thing something different. You can put lipstick on a pig. It’s still a pig,” Obama went on, and the crowd erupted in cheers. “You can wrap an old fish in a piece of paper and call it change. It’s still going to stink, after eight years. We’ve had enough of the same old thing.” 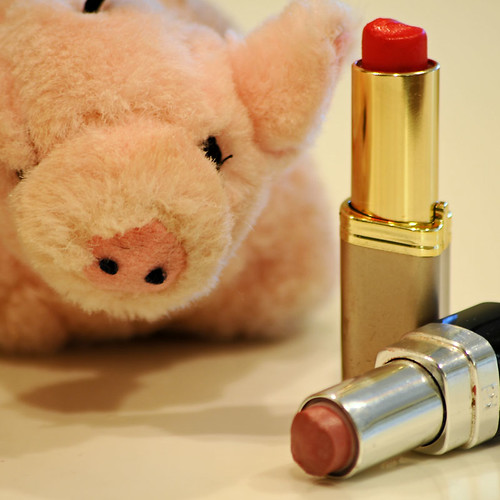 So — was Obama really suggesting that Sarah Palin is a pig?  Not exactly.
Actually, I think this was an elegantly turned smack.  He made his references specific — I have no doubt he was deliberately talking about Palin and McCain — but they were designed as political insults rather than personal.
Given the “old fish” reference, though, I can see how the right is interpreting things this way… but their sensitivity meter has gone over the top.   I can’t help wondering whether their heads will explode before this is all over.
Not only that, but the degree of hypocricy here is really off the charts.  Not only did John McCain apparently use this exact phrase in reference to a Hillary Clinton proposal (and I’m pretty sure she wears lipstick), much of this faux outrage is coming from people who have been attacking Barack Obama non-stop for the better part of two years.
All in all, a tempest in a teapot — but an amusing one nonetheless.
(And an aside:  Sorry about the single photo subject.  I have no old fish lying around, and precious few pigs.)

Obama? McCain? I'm back on the fence.

PolimomElections, Politics (Historical)September 9, 2008
Update:  I’ve expanded on my rationale in a separate post at The Moderate Voice. There’s been a lot of speculation (and angst) about the size and scope of McCain’s convention bounce.  If the blogosphere is any indication of the true …
END_OF_DOCUMENT_TOKEN_TO_BE_REPLACED
20

PolimomSportsSeptember 4, 2008
It’s wayyyy past time to take a break from hurricanes and politics. Tonight, football season officially gets underway — and Polimom has unearthed The Magical Golden Coin once again. Here’s this week’s flips*: NY GIANTS (-3.5) over Washington St. Louis …
END_OF_DOCUMENT_TOKEN_TO_BE_REPLACED
3

PolimomPhotographyJune 24, 2008
Bokeh — a Japanese term for the subjective aesthetic quality of out-of-focus areas of a photographic image
END_OF_DOCUMENT_TOKEN_TO_BE_REPLACED
3

PolimomJust stuffFebruary 14, 2007
Between one thing and another, Polimom’s got a bad case of the grumpies today. I just can’t get past the same-bad-headlines, different day feeling. That’s really a shame for a Valentine’s Day, eh? So — since I can’t find anything …
END_OF_DOCUMENT_TOKEN_TO_BE_REPLACED
4